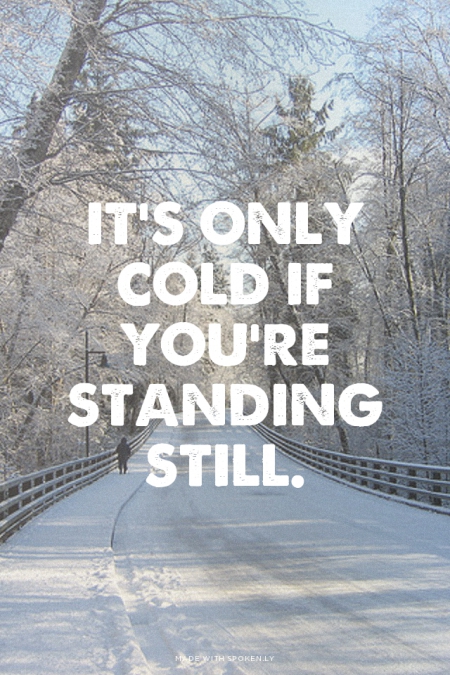 Here it is February 1st already.  And I’m still staying true to my resolutions.  I have actually increased my yoga home practice as well as added some beginning Pilates.  But there’s one thing I haven’t addressed yet.   Running.

I ran track in high school.  I was a slightly above average “half-miler”.  We still called it the 880 then – that’s how old I am.  I trained more with the distance girls than the sprinters and occasionally ran a leg of the mile relay.  I was so NOT a sprinter!!! I have to admit that I loved the training for track but hated the races.  I wanted to quit almost every day of my sophomore year but it wasn’t allowed.  I had to stick it out.  I’m glad there was the no quitting rule at our house.  Today I am glad.  At the time I was miserable.

In college I ran for “fun”.  I know that some people think that’s laughable.  Or a lot crazy. Maybe both.  But I did find that when I was angry or troubled lacing up the shoes and hitting the road were really helpful.  I’m not sure it ever solved any problems but for that time I was running the issues weren’t issues at all.  And there was something quite peaceful about an empty track at night.

Fast-forward a few years and I was a young, working mother with no time to run.  I gave it a few shots but just found it really hard to work into a busy schedule.  When my son was in 6th grade he joined the junior high cross country team.  And that’s when my running “career” took off again.  It was a necessity.  Anyone who has ever been to a cross country meet knows that the only way to see your child run is to run yourself around the course to different vantage points.  After a few weeks of huffing and puffing, I knew it was time to make a change.  I was still teaching, but I committed to making it work.  In the years I’d taken off, a wonderful thing called the Couch to 5K had come about and it was just what I needed.  It’s evolved from just a plan to  a podcast to an app.  It’s my go-to app for starting up again after a few months off.

Once I left the classroom and had more time, I took my exercise much more seriously. I’ve never really been one for classes.  I’ve tried a few over the years.  Zumba was a disaster!  I learned to love running again.  And then on Halloween 2014 I had an accident that changed everything.  I crushed a vertebra, fractured my sternum, and broke a rib.  Doctors thought I’d been in a car accident and wasn’t telling the truth.  Nope.  I went down a slide.  A big, fast, curvy slide on a playground with a crash and burn landing at the bottom.  I know that I’m so very fortunate that I am walking and doing pretty much what I want. Initially I was told I couldn’t run for 6 months.  You know how when someone tells you that you can’t do something and then that’s all you want to do?  That was me.

The six month marker rolled around and I even then I knew I wasn’t really ready.  It was the middle of summer and I’ve never run much in the hottest of months anyway because of my asthma.  So I cooled my heels until September when I gave it a shot.  The first week went well.  So well that I was really quite thrilled.  The second week was hell.  EVERY SINGLE STEP hurt my back. I felt crushed.  That wasn’t helped by the unpleasant conversations with my doctor who told me  to “get used to the pain” and that my “life has changed”.  That’s when I turned to my surgeon and PT back in Germany and started making some changes.  (Yoga has been the biggest.)  But I hadn’t run again.  Let me tell you, fear really does suck!

So today I woke up and started thinking about my day and what I was going to do. And I was tired.  And it was cold.  (Can you hear the whining?)  But I decided to give it another try because if I waited for the perfect time . . .  well that probably never happens, right?

It went well.  I started with week 2.   But ran an extra 4 minutes at the end.  It was cold, but not too cold. I’ve always been more of a cold weather runner and that has it’s own advantages:

So there you have it.  Running “post-accident” part two.