I dropped my little Doxie girl at the vet today for a dental and possible some tooth extractions.  I decided a little “girl time” was in order to keep my mind off worrying about her and I headed to my favorite local coffee shop in the hopes that some friends were there.  What a great way to start the morning – a hug from a friend, great coffee, and a card reading.  I know.  I know.  It sounds so weird to most people.  Even to me – since I hadn’t actually ever done it before. But that said, I did love it.  And it’s not all strange “voodoo” – weird – or “witchy” – or any other preconceived notions that some might have. (I suppose that’s possible, but it certainly wasn’t my experience.)

The deck itself was called the Spirit of the Wheel Meditation Deck.  The cards were covered with beautiful illustrations based on the Native American medicine wheel.  Medicine in the Native American culture isn’t a pill to cure what ails you, rather it refers to a force or power that is inherent in nature.  The wheel itself is many things on many levels.

According to Native American tradition it can be a sacred space, an altar, a centering device for one’s consciousness, a protector, a framework in which to honor the forces of nature, and as an aid to meditation.  If the medicine wheel is new to you, I encourage you to check it out.  There are many ways it can be represented using drawings, totems, stones, etc.  It’s often depicted in art and jewelry.  Used in  some ways it’s a bit similar to walking a labyrinth.  Another cool thing to look up if you haven’t before. 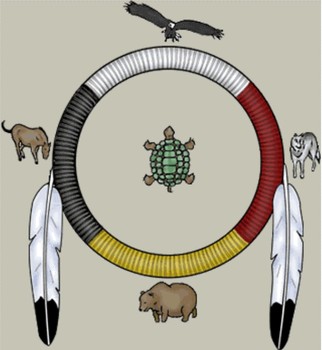 I shuffled the cards and drew out 6.  Those six cards then refer back to a reading from a booklet that explains that card.

Isn’t that a pretty card??  So what did I learn?  Some cards validated things that I already know about myself. . . that I’m gifted with instincts about others and that I’m an educator at heart.  Three of the cards I pulled illustrated the attributes of learning, sharing, and teaching.  I spent 25 years in the classroom so I found it interesting that three of the six readings focused on those ideas.  Another touched on honesty and emotion with a caution to slow down before speaking.  One card suggested that I had recently conquered something in my life.  I feel that way about my recovery after breaking my back at the end of 2014.  I’m still getting better, but I do feel quite accomplished and have a sort of “look at me NOW” attitude especially where exercise is concerned.  Other ideas were just nice points to ponder and put to use:  to assist elders with compassion, to share my gifts with others,  to nurture my strengths, and look beyond fears to venture into the new and untried.  Aren’t those lessons we can all take something from?

So my first experience with having my cards read was quite fun and interesting.  And as I told my friend afterwards, I found it to be “food for thought” and  a pathway to self improvement and awareness.  And there’s nothing weird about that at all!